He looked split against the corner, shared between the planes that were the walls. The fan’s light wobbled and it brightened and dimmed him in and out along with the slow, nauseating spin of the blades’ own shadow cast. The effect drew my eye and then my full attention as I took in what I thought to be perfect symbolism of my subject.

“You wish you had gotten your PhD in Science?” I looked down at my notepad. I didn’t want to be distracted by the split shadow effect.

“Yeah. Life got in the way. Literally. Just how it went. Can't lie. I'm just a measly research assistant. A lab manager of students and post-docs who come and go, come and go. I'm like Father Time, because when they come in, they are always the same age, while I just get older and older. Depressing, Friend. Time is unfair to me. Always has been."

"A PhD would have resolved this?" I was truly perplexed. I study Shadowman who now spread his arms out over the walls in exclamation.

"Yeah, absolutely! I would have loved to have discovered something and created some amazing assays and reliable tools… backed by a high degree, of course, and the freedom. Yeah; the independence. It's a path that I should have started when I was younger. Damn."

"You have over twenty years experience in your field."

"So? It's never rewarded fairly. Never offered first-author; my executions and interpretations are always questioned. I have to do thrice the work as everyone else. But with a doctorate -- automatic. A PhD confirms you've got the right to create and execute, you know; you've got license to do all that. Considered expert by degreed blessings. But, it's all up to you, too, the burdens, the eurekas. You get out what you put in... the hypotheses, delegating... the grants… publishing. It's sink or swim. Scratch that sink or swim: cliché. I never acted on it because; well, you know: life. But oh, my Friend. I used to see myself out in the field gathering data, directing my students, collaborating with my colleagues and returning to the lab… writing technical about my discoveries big and small and giving lectures on them and going all Jane Goodall, et cetera.”

I scribbled my initials next to the others that crowded my page margin. “Et cetera? But, wouldn't you still have that same desire to write? That is… would you still have the time to write creatively with such a career change? Last week, you said -- and I remember you said it quite firmly -- that you wished you had become a full-time novelist.”

I glanced over at the corner again because Shadowman paused longer than usual. Alas, still split; yet unevenly as he brushed his hair back and swiveled in his chair just enough to cast a face profile on the wall to his left. I wondered if he heard my question.

“Friend. It's all about creating something unique. Understand? If I could go back in time to write a killer novel or two... or three; something worthwhile, then I would’ve done that, too. I’d focus on something memorable. Create something uniquely my own. Buuuut...." Shadowman sighed. "Like with the PhD thing, it's too late for all that. I’m middle-aged. Upper, even. We’ve gone over this already. The whole age thing.” Shadowman leaned back in his chair, seemed to think he was too comfortable in that position, bounced back, and sat up straighter and perfectly split by the corner. “Not enough time left to accomplish much of anything. To leave my mark, so to speak. Huh. Another cliché.”

“Regardless, is that entirely true? That you haven't enough time to accomplish anything worthwhile? In your science career? In your writing?”

Shadowman nodded, more to himself. He seemed satisfied with his own answer. For whatever reason, it frustrated me.

I underlined one of my initial scratchings with a heavy hand. "Is middle-age a good enough excuse to not focus on today and set up real, tangible goals for the next half of your life?"

Shadowman shook his head; his profile swapping left and right onto the walls. "It's not really half. More like twenty-five years." He leaned against his chair; he was imperfectly split now as the left wall had only his ear and sideburns, "Maybe even less than that. Not much time to create that masterpiece of a lifetime, right?"...and the wall to his right held everything else plus a double shadow of his hair. "Maybe you're onto something, Friend. Couldn't do both... PhD and Novelist."

"Life is too short as it is? Meaning, that every minute of life is not to be wasted, but lived to its fullest?"

Shadowman chuckled. “I couldn’t write that, you know?”

“'Life is too short as it is'. It’s a cliché. And so is 'live life to its fullest'. Writers would refrain from putting that to paper. It makes me cringe just thinking of it. Look, Friend. It's given me goosebumps.”

“I see." But I couldn't really see anything on the arms of a shadowman. "What sort of stories would you put to paper? You know; if you had all the time in the world?”

Shadowman laughed and swiveled his chair again. "Another cliché? You're on a roll. Ugh -- and yet another cliché. Geez!"

He laughed again; obnoxiously. Oddly, I thought I should see his laughing imprinted on the wall, too. What would that have looked like? Shadow laughter?

"You find something humorous?"

“Well, yeah. Look; we’ve talked about this already, Friend. I write historical fiction. With a twist. I like gay characters. Figure out how they might have survived the biases of their day. The evil. Try to figure out how my characters lied to their comrades… snuck around to find others like them… whatever it took to accept reality within themselves. It takes a lot of work. A lot of time, you know, to get it right, to justify their sacrifices. Really, it takes time to learn how your characters behave, especially in historical context. A 'nine to five' job drug dosing cancer cells and preparing for university safety inspections doesn't leave much time to conjecture gay characters of Nineteenth Century European Empires. Ha.”

Shadowman lost himself in his chair shadow as he bent down and tightened a loose shoe knot.

“Actually, that’s something I've never heard from you before.”

I waited for Shadowman to materialize onto his corner. I looked at him deeper than I should have. “The ''takes time to justify their sacrifices' and that last thing, uh: 'nine to five'. You don't.... How should I put this.... You don't feel guilty, do you? Wanting to write? Instead of working in your lab? Not earning a regular paycheck from all your writing endeavors? Is it guilt you feel... when you sit down and write after coming home from a long day at the laboratory?'”

I had hoped he would give me another one of his pauses to suggest that he was allowing my question some deep thought. Yet, Shadowman swiveled his chair, and he seemed to not have cared to respond or failed to think over the question at all.

“Let’s assume that you don’t have time to choose one path over the other; seeking a higher degree in a science field and your desire to earn a creative writing legacy. Is it possible to time manage in such a way where you can maintain both, if not in more equal parts, but sustainable proportions? A 'nine to five' by day; writing classes and workshops on weekends... some off nights? Take some PTO? Maybe self-publishing? After all --”

I knew exactly what he was going to say. I could write it out on my notepad. Instead, I started to write my init--

“Time management? Seriously, Friend? Not enough time left to manage! Geez, I mean....Time’s not just ticking; time has already ticked! Here's a cliché that I actually like: Time grows like a tree, Friend, and it also dies with the tree. Need a big tree to make some magic. An oak. Here's another one: Creativity is a spark of genius -- yet only a spark. Understand? So, you’ve got to be ready when it strikes -- need the time for it to ignite. I've got the sparks; but I don’t have enough time, Friend; to set it all to flame. So, it’s too late for me. I'm over. Too late for all that. Wasted my life, in a way. Nothing to leave for the world from me but a few fourth-authored research material, some retrograde blog posts nobody cared to read in the first place, and a granite headstone with some overused Bible verse.”

Shadowman melted into his chair. The fan’s light wobbled and the blades flickered across the indeterminate, two-dimensional lump cast onto the corner of my room. 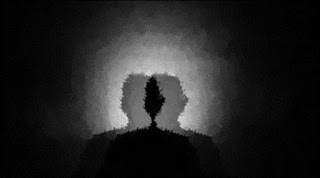 Posted by Randy Wireman on December 13, 2020
Email ThisBlogThis!Share to TwitterShare to FacebookShare to Pinterest
Labels: Wireman