I must confess, dear readers, this has been a very difficult post to write. I have started it a dozen times or more and then deleted it, unable to capture the vastness of it all. I grapple daily with emotions that are greater than me. A complex Gordian Knot of feelings that are wound about, at the center, my mother and her Alzheimer's Disease.

For some years now, we have know that my mother was suffering from the disease though the exact start of her decline is a subject of debate. My sister was willing to see the signs far earlier than I was even though the history of Mother's family is littered with victims of the disease. I don't know whether I was simply in denial of what was happening to her or I was just that distracted, but eventually even I began to see the symptoms.

My father, God rest his soul, was clearly covering for her lapses in memory for as long as he could manage. Yet, there came a time when my sister and I had to step in to help. It began with checking up on them on a more regular basis. My sister and I would take turns going over to check on them, alternating days for visits. Mom was still able to cook for them at this point, but the new vacuum we had purchased to replace the defunct one was a mystery to her. Trips to the grocery were now chaperoned by one of us as Mom could no longer remember how to drive and my father's eyesight was too poorly. In this way we managed for a year or two.

And then, my mother had a fall. She had been cooking hamburgers for the two of them and was taking the pan to the table when something happened. We don't know whether she suffered a stroke or her blood pressure dropped precipitously, but whatever it was caused her to fall to the kitchen floor. The grease from the pan burned her arm and left her in such a state that when I arrived I knew we had to go to the hospital. Many hours later they had her stabilized and we were able to take her home. Yet, during that night she had another episode which left her incapacitated on the bedroom floor.

This time the ambulance was called.

She spent the next ten days in hospital with a sepsis infection in her blood. These were dark times for our family (See my post "The Bitterness of Hope"). She did rally in the end, recovering in a rather miraculous style. There was a stint at a rehab facility to regain her physical acuity as best as possible, but she had lost something of her mind during all this. Her mind no longer functioned as it should having lost the ability to speak coherently. We agreed that she was "still in there" just by her actions and the partial sentences she would manage to cobble together. However, she was no longer able to be the caretaker matriarch of the family.

The decision was made at the end of the rehab period to bring her home rather than institutionalize her. This was not an easy decision for any of us, but my father did not want to see her placed in a home. His own health was fairly poor at this point, so bringing Mom home was a dubious plan at best. Yet, he persevered. He had never lived on his own before and knew little of how to take care of himself let alone the two of them. My sister and I therefore, resumed our alternating visits though now we brought food (grapes and rotisserie chicken were poplar items) and did odd jobs around the house. My sister was tasked with giving Mom showers while I was tasked with goading my father into actually taking one. My wife would prepare meals that could be easily reheated in the microwave (we had to teach Dad how to use it) in random Tupperware and casserole dishes. We would take turns taking them to Doctor's visits based on our schedules and level of tolerance. I generally took my father to his visits as he had a knack for winding my sister up without even trying. My sister would take Mom to her hair cuts and random doctor's visits. Groceries were gathered by us as well until we were able to convince him to have them delivered (a concept he decried vocally until they actually began to show up on his doorstep). At the end, we even had Meals on Wheels delivering to them at lunch time just to make certain they had enough to eat.

It was taxing - emotionally and physically -  for all concerned, but we persevered for over two years until my father's heart finally gave out.

With Dad laid to rest, we now had the daunting task of sorting out the estate. My father planned assiduously for his retirement, hoarding every last inheritance and savings he could muster. They did not live extravagantly so that they might keep their nest egg as large as possible. I always chided him for this, but I suppose he was right in the end. He did not however, foresee the state my mother would be in at this point in their lives. I know he had hoped that they would both live out their days in the little house on Bancroft Street and die peaceful in their sleep. Such is the cruelty of the universe that it did not end this way. Without power of attorney, we had to seek guardianship for my mother as she could no longer make her signature or give verbal consent. If you've never had to go through this, dear readers, simply pray that you do not. I remember sitting in the judges chambers listening to him inquisition my sister as to her competency to be the fiduciary half of the care team be angered near to the point of outburst as she came close to tears. He then proceeded to explain to us that guardianship is not remanding the person into our care but rather that of the State. She was to lose all her individual rights and be subject to the will of the State. We would be the appointed caretakers, but ultimately, we answered to the judiciary.

Let this be warning to you all.

After this, a memory care facility was found near to us that was clean and had a good reputation. She has resided there for a year now. My sister and I resumed our alternating days of visiting, which kept us in her mind and kept us grounded to her. The little house on Bancroft was sold and the contents divided between us. Mom was safe and being cared for and we could visit her as we were able without having to worry about food, cleaning, or the thousand other things that we had been concerned. 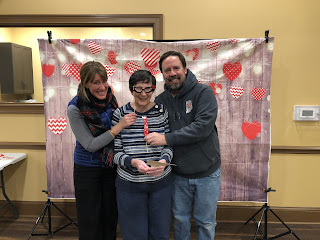 And then came the plague.

Since March, the facility (like all others) has been locked down allowing no visitors inside. In the early days, we were denied any visitation rights. Months passed without so much as a glimpse of her. Summer came and our understanding of the virus broadened. The managers of the facility began letting family have window visits with our loved ones. A sliver of open window with our mother in her rocking chair on one side and us in camp chairs in the mulch on the other side. Brief encounters that nearly always ended in a tearful goodbye, but at least she could hear our voices.

But, the seasons change and summer faded into fall and that slid into winter.

It is cold now. We can no longer have that sliver of screening open between us nor can we go inside. The staff are willing to let us try (bless them for their care), but she has lost so much weight she might flutter away in the breeze. We still visit, each of us making time as we can. I have an arrangement with the weekend nurses to visit on Sunday (official visiting hours are on Saturday).  I sit there on my chair in the landscaping outside her window shouting through the closed window. Our conversations are nonsensical as she cannot make herself understood and I'm not certain she understands what I say. On good days, she sits with me for a half an hour or more. It's on these days that it seems that she is more aware. On bad days, I'm lucky to get ten minutes before she gets up and wanders off.

These are the days that nearly break me. The days when it seems like she doesn't know me and I am left standing at the window with my hand pressed against the glass shouting, "I love you" at her slowly retreating form. 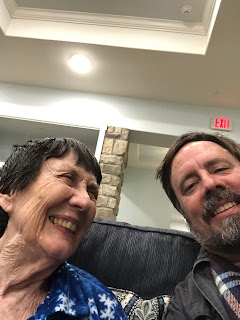