The typical form starts with the stasis or status quo in a setting and typically follows chronologically through time.  An inciting incident invokes lots of rising action (conflict) that escalates to the climax in the story.  After the climax, the final unraveling of the conflict in the denouement begins the falling action and, in the end of the story, the resolution.

For those of us more visually inclined, this may look a little like a basic sine curve: 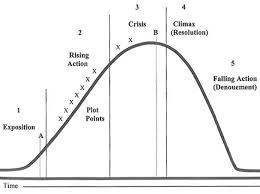 At times, the story arc acts more linear.  It may fall into stricter categories that need less analysis:

Other times the basic curve for a traditional story arc may appear more complex and bumpy with all the conflicts and side plots: 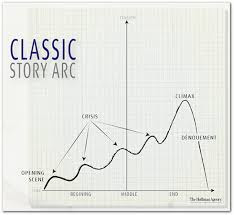 Posted by Heather McGrail on November 30, 2015
Email ThisBlogThis!Share to TwitterShare to FacebookShare to Pinterest
Labels: McGrail