Entertainment in a Circle

Lana and I live on the far south side of Indianapolis. My fellow writer and friend, Mike lives even further south than I do. Our other two friends who you read on this blog live on the north side of Indy. It could be why we are funnier. It's hard to be funny when your nose is stuck in the air all day. Ouch! Actually, they haven't fallen prey to the stuck-up nose disease of the north side...yet.
I say that because of this. The Northside people have had for years a play toy called the round-a-bout. If you ask some who live up there, they act like they invented the stupid thing. Before I go any further, in case you live someplace where you don't have these islands of concrete and don't know of what I speak, let me explain. Most of the time we come to an intersection and find ourselves stopping with four stop signs and looking at each other through deep tinted windows, wondering who will go first. There was a time where we could actually SEE the other person's face, but not so much any more because we all want to drive in cars that look like they belong to the government. So we sit and either passively wait for our turn or aggressively go out of turn, throwing off the balance of time and power for years to come.
Well, we have a new invention as some believe, and as some believe, it was born in Carmel, Indiana just a few short years ago. It is called the round-a-bout. What a glorious thing. Now you come to the same intersection and there are no stop signs. Yes, that's right, no stop signs. The intersection now has been re-designed into a circle. You simply enter the circle and leave the circle onto the road where you want without stopping. That is the theory. But wait! If four cars from four different direction enter the circle at the same time, who has the right-of-way? Well, that's the beauty of the round-a-bout. They ALL do. Hey, everybody's welcome because we have room for everyone. In truth, if the round-a-bout is big enough and the four cars enter all at the exact same time, (which never happens) there is room for everyone at the same time.
The other rule about these marvelous time savers is that the people actually ON the round-a-bout have the right of way. At a lot of round-a bout's you won't actually see a sign with rules listed, it is just something universally known in the land of upturned noses. I think they talk about it at Kroger and on the golf course and soccer practice and at the country club. Not sure.
On the south side, we need written rules in big letters and even then it is not a given it will be understood. In some neighborhoods we need interpreters.
Which brings me to the purpose of this topic. The land of the upturned nose has come south. Last year, Indy built two round-a-bouts on the Southside. I'm still not sure if it was a joke or it was meant for selective reduction of inbreeding, but those two intersection changed the way a lot of people drove. It still does. It was just announced that in the next two years our city fathers and mothers will build nine more on the south side. Oh joy!
Nine more of these things down here should kill hundreds. A year after these things have been up, I still go to these things to find people completely stopped at them with no car coming for miles, like they were a regular intersection. I have watched numerous accidents happen that should have never happened just because the people were basically morons and still didn't understand the concept of the round-a-bout. Really? A circle? I drive 1,000 miles a week and swear to you about half the people out there should not have a license.
By the way, these circles of concrete have been in this country a long time, and in Europe a lot longer. In this country, go to any small Mid-western town. It is called the town square. The typical town square has a road a round it that goes one-way, just like a round-a-bout. The little town squares and the paths around them have been in existence since the horse and buggy has been around. There is one thing that makes the town square a little more challenging though...there is no consistency from town to town as to who has the right-of-way. In some towns the traffic on the square has the right-of-way all the time, and in some towns, the traffic coming onto the square has the right-of-way. Be careful and pay attention.
As they put up these new round-a-bouts on the south side of Indy in the next two years, join me. I will be out there in the center of the new ones, with a cooler and a lawn chair, watching the accidents as they occur. I will have my phone, taking pictures and calling 911. I figure the center of the round-a-bout will the safest place. Join me. We will laugh and point and make fun of people. 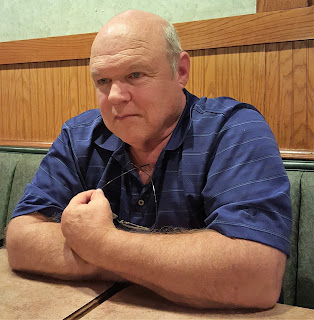 Posted by Unknown on September 29, 2016
Email ThisBlogThis!Share to TwitterShare to FacebookShare to Pinterest
Labels: Krulik