Despite the uncertainty of market reactions, interest rate increases, the domino effects of bad trade deals, local tax issues, and job security; we decided to proceed with two major remodels of our home that would make our basement livable for things other than spiders and our kitchen functional and with enough storage to end the need of storing food in airtight storage bins stacked in our dining room. So, in the last couple of months, we have hosted several visits by our designer and our construction contractor with fingers crossed, arms folding, fingers uncrossing, chin holding and, frankly, very little facts to be certain about.

Last Wednesday changed all that.

Our contractor stopped by and looked over the first set of plans completed and delivered by our designer. Turns out our contractor needed more detailed plans than what we gave him, yet he took what he had and made the best of it, walking us through the basement cobwebs and under rusting pipes and over the tired and creaky kitchen scene with as much foresight as he could muster with our constant muddle of doubts and second-guessing based on needs and themes and even concerns regarding the economy and security of the world. He was… Calming. Logical. Experienced. Also, a Purdue alumnus!

What helped to reset the goals? The contractor made it clear that some things truly need to be corrected, no matter what, like the sump pump and other plumbing not up to code, as well as the dated electrical. He also explained how he could break up the improvements in phases, based on financial and/or structural issues...or Changing of the Minds. He left us feeling more confident about our ideas. He left us feeling renewed and eager to move ahead. Actually, we were ecstatic! We even went out to dinner that night to celebrate the future!

So, the apocalyptic message in my nightmare later that evening was completely unexpected.

A new housing community just off the banks of Fall Creek in Indianapolis was nearing its completion in a late autumn heat wave. While few of the condos were let, only a handful were still framed and exposed to the parched, dry air. Fall Creek was lazy and appeared dark and stagnant; white, chalky boulders visible from the leaf-clogged creek. The tall, white sycamores still held on to their stunningly wide and bright, yellowing leaves. Most of the weedy brush understory were still bright green as summer. A few yards away, the beeps of earth movers and disharmonious hammering of air jacks broke through the river’s tranquility. I could see a crane high up in the clear sky, transporting lumber to a third-storied condo platform. I saw construction workers standing in a group, some wiping the heat off their faces, silently watching the crane gently swing its load in the air across the courtyard.

My mind’s eye then journeyed me through one of the condos, and one I assumed was a show house put together by the management. The living room was furnished with leather furniture and bluish glass lamps with matching picture frames. Geometrical designer rugs in reds and browns covered the wood flooring, and an impressive crystal chandelier hung in the middle of the room from a vaulted ceiling. A TV nearly took up one wall, and a nook within the living room consisted of a modest library with dark wood cabinets and bucolic books.

The bathroom in the hall was a half-bath with gold nickel fixtures, and the wood cabinetry reminded me of re-purposed barn lumber. Just around the corner, the kitchen was French country style with creamy white painted cabinetry and copper pots just detectable behind the bubbled soda glass faces. An open concept, the kitchen had a large, oval island well away from the stainless steel appliances and able to seat six on thickly padded stools. The kitchen floor was wide wood plank and had a highly glossed nutmeg brown finish that reflected the wall of southern light beyond the French doors opening up to a large second story balcony. On the balcony was placed a metal breakfast table and a tall vase in the corner that held stiff sunflowers.

I remember sitting at the island, touching the ice-cold granite countertop with my palms…trailing my finger along the smooth, beveled groove around the island’s edge. I imagined friends and family laughing, drinking, sharing memories in a place like this. I glanced over at the wall of appliances, setting my sight on the wide oven set inside the cabinetry. I noticed the oven door had been removed, and I then felt an intense wave of heat spawning from it.

I walked around the island and up to the oven, realized the gas was on and the flames were shooting up from the slits in the metal lining below the racks. The creamy cabinetry around the oven was now blackened and cracked. I backed up and stumbled over copper pots set on the floor and filled with rusty water.

I heard crackling, like the falling of a huge tree branch. I thought to go over to the French doors, to look outside. Yet, the French doors were shattered; halfway blown off their hinges and poorly covered with plastic tarp that came unfastened, blowing noisily in the wind. I could see the breakfast table was gone, and the sunflowers were scattered all over the balcony. As the plastic tarp bellowed, I could see the sky was bluish-black like a bruise; clouds so thick they punched the roof of the condo building across the court. I looked around the kitchen and noticed that three of the bar stools were now set around the oven, and several stacks of opened cans and food items now cluttered and spilled over the wood flooring. I saw a gun laying on the countertop. As I moved towards the living room, I noticed an arctic chill overtaking the heat radiating from the oven. I remember the urge to stop in my tracks and return to the oven, so I peeked around the corner. The living room was blown out, and several layers of plastic tarp now shielded where the western wall used to be.

My mind’s eye then took me outside where I could see the crane had fallen into the condos across the court. Some of the condos at the far end were on fire, and I could hear the crackling of the wood framing and muffled explosions. I could feel ice droplets raining all around me, and I tasted charcoal with every trying breath. Something then shot across the sky above me and pulled the murky clouds into an oily surf that washed over the earth and crashed at the horizon. I tried to see Indianapolis; searched to find the cityscape, but saw only splotches of fire and tarns of gray smoke.

I knew all of Indianapolis was like this. I knew all the world was lit.

The last scene my mind’s eye allowed me to witness was Fall Creek. The torrential river of brown and red sludge flooded beyond its banks; its sycamores now skeletons twisted, ripped, shredded, and succumbed to the river’s fury. I remember shivering and holding my breath; remember longing to return to the oven with its door removed, to warm my thinning bones, to survive one more day.

And when the next day came, I had returned to uncertainty. 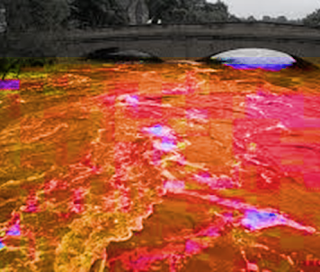 Posted by Randy Wireman on December 03, 2016
Email ThisBlogThis!Share to TwitterShare to FacebookShare to Pinterest
Labels: Wireman