Tonight, dear readers, I bring you an excerpt from Chapter 3 of my novel. I do this for two...no, wait...three reasons. The first is that I am under a deadline at work and as it is a multi thousand dollar job, it requires a great deal of my attention. The second is related to the first in that all my artistic skills have gone into designing this multi thousand  dollar wetland (did I mention that that is what my day job is?), which has left little for my experiment in drawing. The third, and most important, is that I promised that I would try to do this on a regular basis. Thus, I present to you another installment in the Darby saga.

The breeze began to stiffen as they made their way along, stirring the deep blue waters to whitecaps. A short distance past the black rock a clay tiled roof had been raised over the path supported by narrow stone columns spaced evenly along the entire length of the causeway. With the sun directly above, the shadow across the path was absolute. Darby shivered and quickened his pace.
“I haven’t been to one of these since…” Darby’s voice trailed off as his memory began to wander.
“I know,” replied Liam. He chuckled and clapped Darby brusquely on his shoulder. “Everyone knows. It’s hard to miss those empty seats next to the King and Queen, eh?”
Darby frowned. He tried to concentrate on the rhythm of the water against the stone foundations, but he found his thoughts fragmenting. “I can’t sit up there.” he said quietly. “Not without her.”
After a moment, he shrugged and said, “It always meant more to her than to me, anyway.”
Liam’s long strides threatened to outpace Darby, but old habits quickened Darby’s pace and soon brought him level with his friend. Darby saw Liam smirk before slowing his pace just slightly. They walked on in silence for a few moments as the wind gusted rustling Darby’s longcoat. The leather scabbard that held the broken ironwood sword slapped against his thigh. Darby snatched at the pommel pressing it hard against his hip to keep it still.
“Is that the same sword?” asked Liam
Darby nodded. “It can’t be mended and it belonged to my greatfather.”
It has his blood on it still.
A wave slapped against the stone spilling water onto the surface. The spray spattered against Darby’s face with an icy chill. He moved toward the center of the causeway to avoid the rising swell but found himself going deeper into the shadow cast by the roof. He pulled his coat tighter about him.
“That won’t do you much good if the Teor decide to attack.” said Liam.
Darby shifted his grip on the pommel. “There hasn’t been so much as a foraging party this side of the Gohlengar for over a year now.”
Liam shrugged. “Well, you’ve been out there. What did you find?”
“Nothing,” he replied after a moment’s pause. “I went as far as Ederell Font, but all I found were some old campsites. Two of them were mine and third was well over a year old.”
“So…, nothing of the Teor?”
There was a hitch in Liam’s voice when he asked the question. Darby knew what he was really asking. Unlike his ever brusque sister, Lewellyn, Liam at least tried to be tactful. Darby shook his head and kept walking.
After a time, Liam began to hum softly. It was an old tune in a style that was more plain song than lyric. Somber in tenor and older than most anything else Darby knew, but one that nearly every child could sing by rote by the age of ten. The words came easily to him scrolling in his mind as if he were at his lessons again.
Far over the dark oceans cold,
Through stone and rock to the land of old.
Fire and wing and sacrifice,
The Gate of Stone was bought with a life… 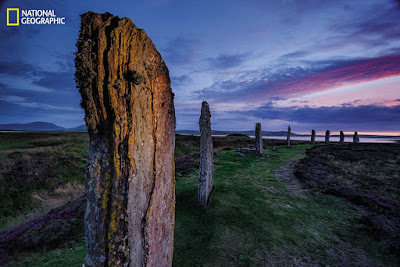