A couple weeks ago, my cousin Dennis, my son Daryn, and my son-in-law Steve, and I made our annual trek to southwest Missouri, to just outside the little town of Lebanon, Missouri. Every March 1st in four State Parks that are spring fed began the trout fishing season. Dennis and I have been going to Bennet Springs Park since 1975, my freshman year of college at the University of Missouri, about 70 miles from Bennet. Many years later, my son joined us, and of course, many years after that, Steve joined us too.
I have written about this little adventure of ours before. With the advent of electronics and the world going faster and faster, outdoor activities in general have dwindled in popularity over the years, especially fishing and ESPECIALLY fly fishing. If you have ever seen the movie The River Runs Through It,then you know the type of fishing three of us do. Steve hasn't taken up the art quite yet.
This year I decided to throw my phone in a Ziploc bag and pack it away in my fishing vest to take a couple pictures as we stood there just after the horn blew on opening day so you could see what it looked like with all us fanatics out there together. This year on March 1st there were 1367 nuts at 6:30 am ready to go in 38 degree temperatures. Not bad really compared to other years. Last year we stood out there in 16 degrees and the coldest I can remember was 8. Not fun. Of course I can also remember a year when it was 65. 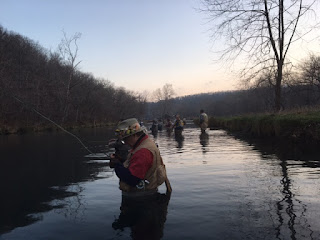 Opening day this year was on a Wednesday, which meant there would be fewer people than say, a Saturday. The record opening day, as you look at the photos, was on a Saturday. It was in 1992. We were there. The total was and still remains-4,092. It was insane. Keep in mind that the stream is around a mile long from the spring until where it dumps into a river, so whether it is 1,367 people or 4,092, you have to stuff them in a mile of water and on one side of the stream because you can only fish from one side.
Look at those photos again and imagine why fanatics like us do this every year and don't stop and then tell me why the fanatics don't teach their sons and daughters to carry on the tradition. Why aren't the millennials out there? Why aren't the millennials, who claim to support all things earth out there instead of playing video games and texting their friends from their parent's basements? Something is wrong here. They are missing out on what our Lord created for them. 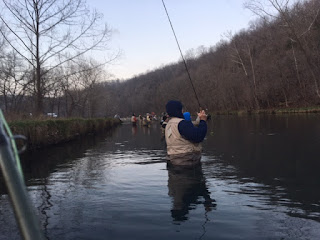 Posted by Unknown on March 16, 2017
Email ThisBlogThis!Share to TwitterShare to FacebookShare to Pinterest
Labels: Krulik