An Evening with Jason Pell Learning about Kickstarter and Pinpricks

I was in Charlotte, West Virginia two weeks ago and had the pleasure of meeting Jason Pell.  He is a young writer who sat down with me for nearly an hour to talk about writing.

He told me about Kickstarter and Pinpricks.  Let's start with Kickstarter.

Kickstarter is an amazing company and website.  I had not heard of this company before, but I'm going to toss in my two pennies about this.  Overview: this company has a team of marketers and businesspeople who work to raise funds for a wild variety of projects.  Jason talked about using Kickstarter for his projects, and for his most recent project, Pinpricks, he raised over $10,000 to get the project going.

Kickstarter is not a publishing company, but they set up goals, pledge levels, and timelines.  After the goal for funding is reached, the artist pledges the art to the funders within a set time.

Personally, I was super excited about this, but I see some serious drawbacks to trying this as a novelist/writer.  Jason Pell is using Kickstarter to support the graphic novels he needs to print, but also Kickstarter seems like an incredible method to start marketing and gain web hits for your project.

Kickstarter can set up music projects and art projects, certainly, but I'm not certain that this can work the same for writing a book.  Yes, I could probably set up a Kickstarter to write a novel, including a budget for research, time, and whatever else, but really, writing a novel doesn't cost much outside of time.

Moving on to Pinpricks. A Book of Tiny and Terribly Oddities by Jason Pell.

This is Jason Pell's fourth project on Kickstarter, and he has done all the artwork for this project: 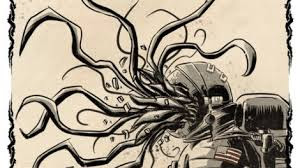 Pinpricks. A Book of Tiny and Terrible Oddities. By Jason Pell.

Listening to Jason talk about this project, I was looking forward to buying a copy and reviewing this (on the blog).  The artwork is awesome, and the brief synopsis I read describes 101 stories that, "range from scary, humorous, and sometimes, maybe too rarely, a little too hopeful."

Funny thing about Kickstarter is, from what I can tell, once the funding period is complete, I cannot give money or pre-order the material.  I have to wait until September, I think, for Pinpricks to be available--perhaps on Amazon?

So I looked at other titles from Jason.  He has some very interesting titles, but I decided not to go for zombies or suicide, and ordered Season's End, a gothic, horror-fantasy.  This has original artwork done by Blake Wheeler (not Jason). 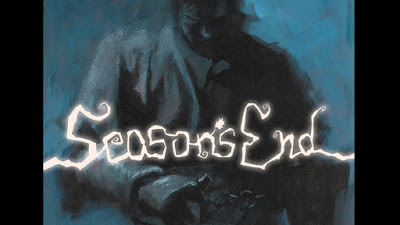 "Empty towns naturally tend to have a foreboding presence.  Gravity's tendrils hold too firmly and motes of memory interfused with dust lost capaciously in the air giving only a shadowed ghost of what was before.  Vanbille had all the unpleasantness of any other abandoned village, but also something more" (55).

One thing Jason said is that writers often do not support each other.  This is more true than not.  I am sorry to say that I am often not supportive of other writers.  I am very proud to have met and spoken with Jason, and the nuggets of gold in Season's End are fantastic.