Steven Pinker, a rockstar linguist (and yes, this example is a few years old) writes,


Now our grammar is recursive.  The rules create an entity that can contain an example of itself.  In this case, a Sentence contains a Verb Phrase which in turn can contain a sentence.... 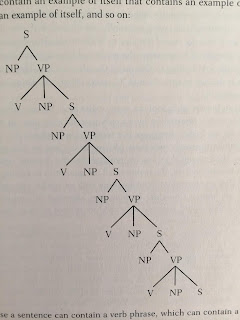 For example, I think I'll tell you that I just read a news story that recounts that Stephen Brill reports that the press uncritically believed Kenneth Starr's announcement that Linda Tripp testified to him that Monica Lewinsky told Tripp that Bill Clinton told Vernon Jordan to advise Lewinsky not to testify Starr that she had had a sexual relationship with Clinton.  That sentence is a Russian doll with thirteen sentences inside sentences inside sentences.  A recursive grammar can generate sentences of any length and thus can generate an infinite number of sentences (Words and Rules, 8-9). 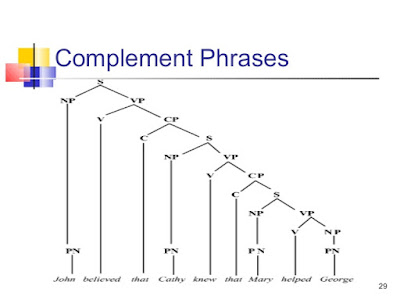 This is the wonder and magic of writing and language.  We can create uncountable, diverse, unique,  amazing sentences. 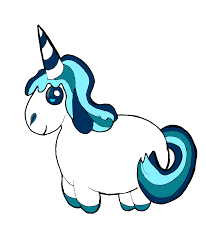 Sometimes, as we write, the marvel of this becomes diluted.  Barbara Baig says, "writing is a dance between content and craft, between the content mind and the word mind" (Spellbinding Sentences, 25).  The plot and the characters can outweigh the language.  The lovely alliteration wanes.

And we sometimes fall into our patterns.  I see this in other writers, and I know this pitfall traps me.  The same sentences show up on my screen.  The same words repeat themselves.  The patterns of speech sound like a dull, monotonous rhythm.

I once loved words and language with a fiery thirst.  Reading those writers and theories gives me more excitement about language than I have had in some years.  The exercises in Elizabeth Berg's Escaping into the Open are excellent--I've been going through them a little at a time.

Yes, journalling and writing exercises can seem a waste of time.  Finding the words and exercising the language to become a better writer... these are the things that seem most enjoyable when I can't quite force myself to write anything else.