My wife and I have lived in our house for a little over a year now.  It is an older house, built in 1930--a two-story Cape Cod style house on a corner lot, in the heart of downtown, small town Indiana.

Like most old houses, it has quirks.  Some quirks are expected and some are just down right comical….

Well, I find comical, but my humor is altered compared to most.

Shortly after we moved in, we had a very surprising visitor.

My wife and I came home from some event.  It was our first week living in our house.

We walked through the house turning on the lights, settling in.  My wife walked past the stairway to turn on the lights to her office.  She quickly yelled for me.

“Nick, there is something on the stairs… and it’s hissing.”

She quickly found me in the kitchen with a very startled look on her face.

Thinking to myself, “It’s November.  Too cold for snakes to be out about, what’s hissing in our stairway?”

I walked around to the stairway, turned on the lights expecting to find some long snake curled up on one of the stairs.  But I saw nothing.

Just as I was mid-sentence questioning my wife, I heard the hiss.

Looking up the stairs, I still saw nothing.  As my eyes scanned down the steps I caught a slight movement on the third step.  A sizable bat with its wings sprawled out, mouth opened, and long white fangs showing was sitting on the step hissing at me.

Shocked and confused, I hollered to my wife, “We have a bat.”

This was the first of more to come.

Shortly after we moved, and after the first bat sighting, we moved in our two cats, Gaby, the wild cave woman cat, and Gracy, our princess cat.

One weekend morning we found a pair of shriveled up wings laying on the floor of my wife’s office.
Looking at Gaby, we knew the cave woman cat had her way with the flying visitor.  She had a proud stance about her as I picked up the leftovers to dispose of them in the trash.

This past summer I woke up in the middle of the night.  I walked out to the kitchen with my cell phone in hand to use as a light to find a glass for water.  Standing at the sink drinking some water, I sensed something else in the house.  I heard Gaby trotting through the kitchen heading for the living room.  She has a collar with a bell on it.  Jingle, jingle, as she passes through.

Not fully awake, I dismissed my feelings and walked back to the bedroom.  As I walked through the living room, I caught a dark flicker of something.  My cell phone backlight had just turned off, leaving me questioning in the dark.

I tapped on my cell phone. The backlight filled the room with a dim light.  Holding my phone up I saw the flutter flutter of a black bat flying just below our 9-foot ceiling.  It was flying in circles around the ceiling fan.  I heard Gaby’s jingle bell and pointed my cell phone towards the ground. She was sitting in the middle of the room looking up, tracking the bat.  She then looked at me with a look of, “Do you see it?”

I continued on to the bedroom told my wife, “There’s another bat in the house.”  Half-awake, she asked if I closed the door to our bedroom. Stupid me, I hadn’t.

Our other cat Gracy was in bed with us, and she started to move from her sleep.  Reaching for the flashlight on the nightstand, I lit up the room.  Gracy stood up, looking at the bat flying around our bedroom.

By now my wife was wide-awake and full of concern.  “Get it out of the room,” she said.

I was able to flush the bat out of our room and closed the door.

Settling back into bed my wife asked, “Do you want to do something about the bat or should we let Gaby deal with…”

Just as she was about to finish her sentence we heard the jingle jingle with a few loud crash bang thud sounds.

Seconds later the deep proud wild call that only a wide cat like Gaby can produce sounded through the house.

She was announcing her kill.

And she continued to call out her announcement.

I went out to find the carnage.

Walking out into the living room, I saw Gaby come running up to me with excitement.  Talking at me.  She turned and led the way to her kill.  Her jingle bell ringing out as well has her proud meows.  She stopped and sat next to the dead bat on the floor still talking at me with excitement. 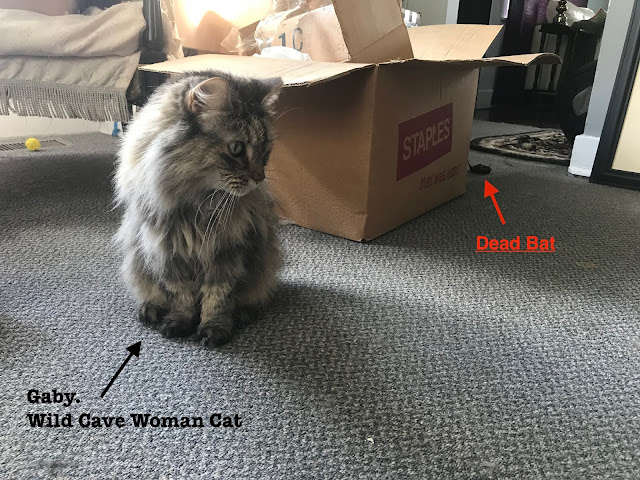 A week later we had the roof replaced.   Our house had a dormant chimney that we had taken down as part of replacing the roof.

We figured the bats were getting into the attic through the dormant chimney.  How they got into the interior of the house we have no idea.

That was over six months ago.  We have not had any bat visits since.

Posted by Nick Dyakanoff on January 26, 2020
Email ThisBlogThis!Share to TwitterShare to FacebookShare to Pinterest
Labels: Dyakanoff