As many of you remember (or perhaps you don't as it has been so long since last I posted), I am not made of the same stuff as the younger generations. The stardust and quantum energies that coalesced to form the haunted and ruinous temple that is me are older and more basic than those of the generations that have since been born. Were I to make a real world comparison, I would liken myself to a rotary phone with a ten foot spiral cord that was ever getting tangled to an iPhone 13.

Evidence of this sad little truth lies in an incident that occurred some months back when I made a trip to Starbucks. Now, I would like to point out that I do not drink coffee. Coffee and I do not play well together, digestively speaking. However, I do love the smell of coffee and I have tried to drink it on many occasions, but the resulting reactions are unpleasant for myself and everyone around me.

As such, I drink tea. Starbucks is not known for tea.

My family, you see, they drink coffee. They enjoy the fanciful concoctions with names that sound as if they belong in one of my novels. Chocolate flavored coffee or those with flavored creamers seem to delight them the most. And I, being the considerate patriarch, decided one day that I would stop by one of the local Starbucks on my way home just to surprise them with something they enjoyed. I was feeling very proud of myself as I turned into the drive thru lane. I mean, there did seem to be an inordinate number of cars, but it was a Friday just after rush hour so I was still feeling confident in my generosity.

The universe had other ideas.

My turn was soon approaching and I had come within site of the menu board. This is where I should have realized that I was in over my head. Still, undaunted, I stalked the listings like a Hanna Barbera lion in search of my prey. To my compounding confusion, I fond things such as: Cappuccino( I have heard of these from TV and movies), Honey almond milk flat white (ummmm...), Cinnamon Dolce Latte (Sounds...fancy?), Macchiatos (WTF?), Mocha (Chocolate-ish?), Clover Brewed coffees, and these are just the "hot coffee" items! 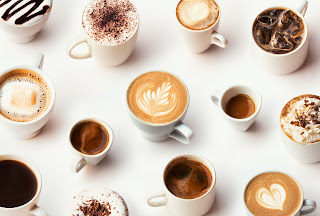 Steady on, lad. You can do this.

Right then, it's nearly my turn though the person in front of me seems to be ordering for all of the city and the surrounding counties. More time to decipher these hipster (do people still say that?) runes. Hmmm...mocha. I've heard the wife say that before for...ice cream, maybe? No, something to do with desserts. It means coffee flavored chocolate? Well, I suppose it would be the reverse here. Mocha it is then.

The surburban-elite-land yacht finally pulled forward taking the far too tight turn like hippopotamus in a sluice. I slunk forward like the coffee Philistine that i am and prepared to order. The speaker crackled on a woman asked me what I would like to order.

"Which kind would you like?" she asked in return.

Which kind? There' s more than one? Bother.

I hurriedly look at the menu trying to see what I had missed. There were really only three options, but my brain latched onto the Frappachino (whatever in God's name that is) menu a glitched. There are at least a dozen varieties of those and so I replied, "Mocha Cookie Crumble."

There was a pause before she replied, "So you want Frappacinos, then?"

Frappaccino? What the hell is that? Oh, bother and damnation! I'm on the wrong menu.

"No, just a mocha please." I said hoping to steer the conversation back to where i thought it should be.

At this point, I could feel the judgement from the professional coffee drinkers in line behind me. Their vexation flew forward and piled itself on top my growing anxiety. Steady on, old bean. You can do this.

Another slightly longer pause before she answered. "So you want a cold brew?"

I could feel the heat rising at the back of my neck and in my cheeks. My ancestors were looking down on me and facepalming in despair at my ineptness. But then just as I was to pull out of the line in shame, I found the right part of the menu.

There was definitely laughter in the ranks when she answered. "What size would you like? Tall, Venti, or Grande?"

Venti? Grande? I haven't studied Latin in 25 years. What the ever loving f....

At this point, one of the cars behind me honked its horn followed shortly by another.

Frustrated and in a panic, I replied, "Look, I don't know the words to tell you that I want the chocolate flavored coffee in the large cup!"

There was a longish pause after that before the speaker came on again. Laughter tumbled out in digital buckets. She tried to reply but had to cut off her mic. I didn't wait for her to answer. I just pulled forward to the window and then handed my card to the person at the till. I didn't look at them save for a brief moment when they handed me the drinks. I believe I saw pity in her eyes, but I didn't linger long enough to find out for certain.

I am told that I did indeed get the right coffee drinks, though I think my family may have taken pity on the old man and told me what I wanted to hear. I have not returned to that Starbucks or any other as I am certain the tale of tragically unhip old lion has been spread far and wide.