Maybe a couple of years ago in our fiction group, I said something about perfect tense, and Kristen asked me how I knew so much about grammar.  I shrugged and said I learned a lot in graduate school.

Funny, I have thought about that brief comment and that pseudo lie in the years that have passed.

I didn’t mean to lie.

I didn’t have an answer.

Truth is, my love of grammar started long before this.

My story begins when I was in tenth grade.  My family had moved to New Jersey when I was in eighth grade, and I struggled in school—but that’s not quite true, either.  My older sister was a year ahead of me, and she excelled in everything without trying.  I may have been smart, too, but I had different skills and different interests, so I bounced back and forth between the college prep courses that required an A to continue to the next year and the regular courses.

This was a typical pattern for me.

I didn’t care much for my grades.  I didn’t much care to follow in my sister’s footsteps.  I was a gloomy teenager without much hope.  But I loved writing and words.

Freshman year I was in the regular English course.  I breezed through this with an A.

Sophomore year I was in the accelerated, college preparatory course taught by Ms. Stout.  She was particular about being addressed by Ms., and God planned for me to be in this class.

This was years ago.  Decades ago.

Ms. Stout gingerly handed each of us a small blue writing handbook, a paperback, which was unusual for a textbook in high schools in those days.  This was a paperback named The Lively Art of Writing, and we called this the LAW book for short.

We sniggered and called it the bible for Ms. Stout’s outside of class.

Ms. Stout was an intense woman with fiery blue eyes.  I wouldn’t want her to know that we joked about the LAW book.

But maybe she would have laughed, too.

I think we had a list of about 30 rules outlined in the LAW book, and I think I wrote about this in an earlier blog.  These 30 rules were LAWs.  According to Ms. Stout, if we broke any of these laws three times in an essay, this would our grade to a C.  Any subsequent infracture would drop our grade down.

I doubt any teacher today could get away with such strict rules, but we learned the rules and how to identify them very quickly.

Most of these rules I have forgotten.  The best I learned quickly.

Passive voice was perhaps the most valuable.  I recall combing my essays for passive voice on the bus before school, looking for the tell-tale be-verb combinations.  I found them quickly and learned to distinguish them well.  Once, I questioned her passive voice question, saying it was not a verb phrase, and she agreed with me, raising my grade with a smile.  She seemed pleased that I knew the difference between a passive verb phrase and what might have been an adjective phrase.

Passive voice seemed to be the most useful tool.  Ironically, I use passive voice steadily in my current, medical job, and this continues to annoy me because the requirements of my job demand the passive.

The other rules were numerous but logical.  The only other one I remember clearly is, Avoid “it” and “there” as a subject when they are placeholders without any specific meaning.

Other rules are less impressed on my memory but probably just as marked on my style.  Not using “wise” at the end of words was another rule: “Grammar-wise, the class was very fruitful.”  This sloppy contraction never seemed useful or helpful except when I needed to avoid it.

Ms. Stout was a funny woman with large blue eyes and dark black hair.  That classroom in New Jersey was just a partition off a larger common walkway, and yet I remember Ms. Stout vividly talking of essays and meaning and words.  Every word conveyed meaning, she had said.  Make every word count and make every word effective.

I made a B in her class and ended up in the regular class the next year.

Funny, when I started in college, diagraming sentences and learning about transformational grammar, I thought of Ms. Stout.  The foundations of my grammar probably started earlier, but Ms. Stout solidified some of the excitement and passion for what I learned. 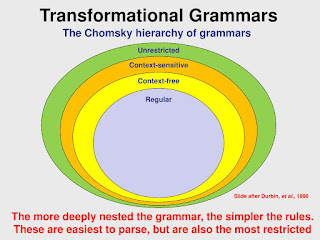 Then, I read tons of Chomsky and Pinker, and I don’t know if I agree with everything that Ms. Stout taught us as a straight rule.  I think I learned that grammar is communication and understanding, not just rules and formulation.

But I learned some rules and formulation to understand the expectation and parameters around us is extraordinarily good.  The more we understand about language and its patterns and its deviations and its transformations the more we can communicate more effectively.

Or so we think.

Or so I have thought.